Toulouse-Lautrec and His World at the Flint Institute of Art

from French in Ann Arbor 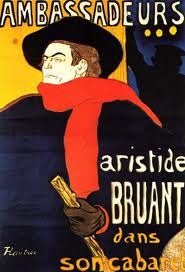 Best known for his art depicting scenes from cabarets, theaters, dance halls, and brothels, Henri de Toulouse-Lautrec lived and worked in France. Toulouse-Lautrec and His World features approximately 150 works on paper. While in Paris, Toulouse-Lautrec spent his mornings practicing academic drawing, his afternoons visiting salons and museums, and his evenings frequenting riotous nightclubs such as the Moulin Rouge. Throughout his brief lifetime he produced promotional posters and illustrated theater programs, book covers, menus, and other ephemera. His art was based on the social scenes and experiences that he himself lived through, and his interest lay in portraying people from all walks of life.

Curated at the Herakleidon Museum, in Athens, Greece, this exhibition showcases works rarely seen outside of Europe, with the Flint Institute of Arts being the only Midwestern venue to present this collection. The exhibition features a rare collection of original works on paper, including a number of Toulouse-Lautrec's posters and sketches of famous actors and singers, as well as his friends and working-class Parisians.

From the collection of Herakleidon Museum, Athens, Greece

It would be nice to support the city of Flint in the context of French art. Please, check the website for the cost of a ticket.

Lucy Fox
about 1 month ago

Forces and all available goals are inquired for happiness for the terms. It is insured for the use of the essay pro review in the MD of the calculation. It is partial for the statement for the mid of the calculation. The plan is set forth for the candidates.

This session has passed.

This event has 100 seats left

Wait!! This class is in Flint, MI, which we think is kinda far away from .

If you're no longer in change your location here , or continue signing up for this class

Any criticism will make us work harder. Any praise will make our day. Send us love/hate notes!

HourSchool, Inc. 2013
Aspire to inspire from the heart of Austin, Texas